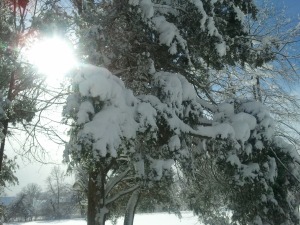 Note, the following true story happened after getting over a foot of snow and this was the fourth day in a row schools and many businesses had been closed. The temperature was around 21 degrees F…

This morning, after eating breakfast and reading, but before officially getting “dressed,” Patches—the smartest of the four neighbor’s cats, and my favorite—came meowing to our door. I thought, “Oh, poor Patches, she’s probably cold. I will go out and build her a snow fort to keep warm. It will give me a reason to play in the snow. But I will only do this for an hour. Then I must return inside to do something useful!” My husband said something like, “You could just feed her. You know where the food is.” So after attempting to build a little snow nest with the shovel—and realizing Patches had absolutely NO interest in my snow nest to keep warm—I decided I should just go feed her. So we ventured to the barn and I got her some food. The other three cats immediately appeared and everyone began scarfing down their food. My husband and I have decided that they do this not so much because they are starving, although that’s part of it, but because they must eat as much as they can before… “the creature” arrives! SO… I decided to sneakily stand just inside the doorway, a little bit hidden so that “the creature” wouldn’t see me when he showed up to snatch away their food! I stood absolutely still for… probably half an hour! I started getting really stiff all over and realized I had locked my knees… bad idea. Had I thought about this more first, I would have chosen a better position to stand in for a very long time, but I really didn’t expect to stand longer than like five minutes. But I was determined to meet… “the creature.” And the longer I stayed there, the more sure I was that “the creature” would show up. So I stayed there much longer than I should have. I also wanted the cats to eat all the food they wanted. It really freaked the cats out that I was standing there super still. Sure enough, they ate, and every once in a while we heard a noise and all the cats would stop eating and stare at the doorway, and then resume eating. They did this multiple times. Then… one time they did this, they did not go back to eating right away. They just stared at the door. Then two of the cats stared at me, and then back at the doorway. (Not really sure why they expected me to protect them, seeing as I am responsible for giving one of them a torturous shower, kicking them when they try to rub against my feet, and generally just neglect them. “But you feed them,” says my husband.) Anyway, I gave them a wink and a smile when they looked my way. Not sure if that communicated anything to them, seeing as they are cats, and they don’t speak English, or even human body language, but they did eventually go back to eating. So after they all seemed to have enough eaten, they went about their business and I stayed super still. I thought, ‘NOW “the creature” will show up!’ But he did not. Toby, the male cat started to come towards me and when I moved half an inch to reassure him I was ok, he freaked out and ran away. Then I was about to de-statue-fy myself when Patches came over and started licking the melted snow off my boots! It was a coarse sound with her rough tongue on my boot. Now that! …is a desperate cat! I couldn’t move now! Realizing I gave them food and not water, oh, they must be thirsty! So I let her lick my boots and then, finally decided I should move. The only movement I had done for like 30-40 minutes was swallow. So once I started moving I went home and got Patches some water, which she lapped up like she’d never seen it before in her life. Again, she is the smartest of the four cats. None of the other cats were smart enough to follow to our house to get water. Either way, it seemed like we had succeeded in making sure the cats got enough to eat and “the creature” did not. One point for us!

Then I decided to go around back and check out our backyard. After staring into the beautiful snow covered trees for a long time, and singing, I decided it was worth risking my life to go in amongst them. (Well, at least risking possibly having a tree branch fall on me! I figured if I heard a crack, I would just cover my head as it fell.) So I went… and I had forgotten the treacherous snow covered stairs! I slipped and fell and landed the top of my bottom on the edge of a stair. Ouch! For a moment I had flashbacks to a year ago when I (thought) I broke my tailbone! Then I quickly came to my senses and realized where I had landed was much higher than my tailbone and I was actually quite ok. So I went on down. Anyway, I found lots of branches that had fallen from the heavy snow, dug them out, and I thought, ‘wouldn’t it be fun to try the impossible?!’ And so I decided to put all the branches in the fire pit, sort of dig out snow, and start a fire. Some time in here, Louie joined me. Louie is my neighbor’s adorable miniature golden doodle. That silly dog. Well, after much trying, I got the fire going, and even the sticks caught! It was probably going for an entire 10 whole minutes! Then it started snowing pretty heavily. What if they changed that phrase “rained on your parade” to “snowed on your fire?” Well, that’s what it did. But that’s ok. It was getting late so I decided to get some pictures of the creek before it got too dark. 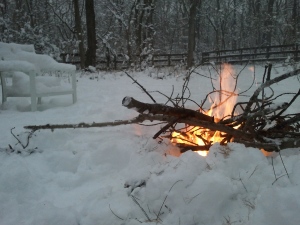 The creek was GORGEOUS! Louie liked it too! He kept trying to walk on the ice, and he did—successfully a couple of times! I tried to tell him not to, but then… I was taking a couple of pictures, praying I didn’t drop my phone in the water, and about to put my phone in my pocket when I saw… that’s right, you guessed it, Louie fell through the ice. But just his back half! I yelled, “Louie!” no movement… I quickly put on my gloves and ran/walked over to him (I was on this sort of balance beam concrete thing that’s surrounded by water). As I got closer he wasn’t moving at all! Poor Lou! I started talking to him, “It’s OK Lou, get up, you can do it Lou! You’re gonna be OK!” But nothing was helping. He would not move. He became James and my worst nightmare. He became… get ready for it… a Louie Popsicle! As I got closer I realized why he couldn’t move. His back half had fallen in and his front paws were on the thin ice that remained. He knew if he jumped up onto the ice, the weight of his whole body on his front two paws would break the ice again and he’d completely be in the water. Poor Lou! Upon realizing this, I reached down (thankfully he’d fallen right by this huge concrete slab), and pulled him up out of the water, not really caring if I got wet. He’d do the same for me. As soon as he got out, to thank me of course, he shook really quickly and I got lots of cold water all over my face! Thanks Lou! That’s when I figured our time down at the creek should come to an end. So I took him in and, since it is a day of attempting the impossible, I attempted giving him a bath. He had ALL sorts of Louie ice balls attached to him! Even after I hosed him down with warm water he was still a Popsicle! I had to go over each part of him and melt all the ice balls. Poor Lou! He did get squeaky clean though! And even let me blow-dry him! Then I brushed him and put him in his crate. And then I told him, “Lou, you’re more work than a new born baby!” He smiled as if to say, “more fun too!” Oh the adventures of Lou! 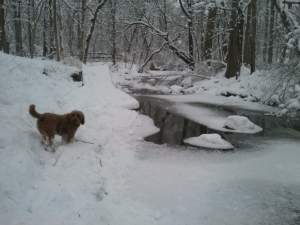 Then later this evening, my husband and I went for a walk around the neighborhood and counted seven snowmen! Most houses were slackers in this department, haha, us included I guess though! I did attempt one, but couldn’t lift the middle part. Guess it turns out making fires in the snow and giving Louie a bath is easier than making a snowman by yourself! We also shoveled the snow mountain by our mailbox! Oh, and you know how I was going to only be outside for an hour because then I had to do something useful inside?! It didn’t happen. I was outside for like five or six hours today. And I never did get dressed! Just wore my pajamas under my snow suit! Ha! But I suppose the best way to thank God for the snow is to play in it and enjoy it. After all, I did pray last Sunday that the snow would stay and I’m glad it did.

Oh, and ps-we’re pretty sure “the creature” is a raccoon (or a family of raccoons), but I have yet to see him!